Breaking
You are at:Home»USA»UAE and Bahrain officially ink ties with Israel

Israeli Prime Minister Benjamin Netanyahu called it a “pivot of history” and “new dawn of peace.”

In Arabic, Emirati Foreign Minister Abdullah bin Zayed Al Nahyan declared that “we are witnessing a change in the heart of the Middle East, a change that will send hope around the world.”

Under the deal, Israel agreed to suspend applying sovereignty to parts of the West Bank, also known as Judea and Samaria—a part of the deal Nahyan touted in his Tuesday remarks in that it would allow Abu Dhabi to “continue to stand by the Palestinians.”

The United Arab Emirates and Bahrain signed historic agreements at the White House on Tuesday to normalize relations with Israel, the first of their kind in 26 years.

In front of a crowd of about 200 people on the South Lawn, the UAE signed a normalization accord that was verbally agreed upon on Aug. 13, while Bahrain signed a similar agreement with the Jewish state, the status of which was announced on Sept. 11.

Additionally, all three countries and the United States signed a document affirming the “Abraham Accords.”

These were the first normalization deals between Israel and other Mideast nations since Israel’s peace deal with Egypt in 1979 and with Jordan in 1994. The UAE and Bahrain are the first Gulf countries to normalize ties with the Jewish state.

The UAE and Bahrain were represented at the ceremony by their foreign ministers, Abdullah bin Zayed Al Nahyan and Abdullatif bin Rashid Al Zayani. The Israeli delegation was led by Prime Minister Benjamin Netanyahu.

“We’re here to change the course of history,” said Trump, speaking from the first-floor balcony of the White House overlooking the South Lawn. “These agreements prove that the nations of the region are breaking free from the failed approaches of the past.”

Netanyahu called the occasion a “pivot of history” and “new dawn of peace.”

“To all of Israel’s friends in the Middle East, those who are with us today and those who will join us tomorrow, I say, As-salamu alaykum. ‘Peace unto thee.’ Shalom.”

“And you have heard from the president that he is already lining up more and more countries,” added Netanyahu. “This is unimaginable a few years ago. But with resolve, determination [and]a fresh look at the way peace is done, this is being achieved.”

In Arabic, Nahyan declared that “we are witnessing a change in the heart of the Middle East, a change that will send hope around the world.”

“We have come today to tell the world … that peace is our guiding principle,” he added.

They also agreed to increase and fasten cooperation in developing a vaccine for COVID-19.

Under the deal, however, Israel agreed to suspend applying sovereignty to parts of the West Bank, also known as Judea and Samaria—a part of the deal Nahyan touted in his Tuesday remarks in that it would allow Abu Dhabi to “continue to stand by the Palestinians.”

In his speech in English, Zayani said, “For too long, the Middle East has been set back by conflict and mistrust.”

The Israel-UAE deal affirms the aforementioned and it will be submitted to the U.N. Secretary-General “for registration in accordance with the provisions of Article 102” of the 1945 U.N. Charter, which states that “every treaty and every international agreement entered into by any Member of the United Nations after the present Charter comes into force shall as soon as possible be registered with the Secretariat and published by it,” and that “no party to any such treaty or international agreement which has not been registered in accordance with the provisions of paragraph 1 of this Article may invoke that treaty or agreement before any organ of the United Nations.” 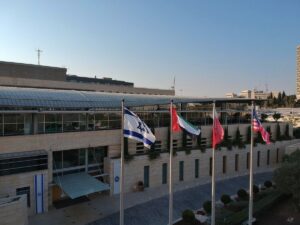 The flags of Israel, the United Arab Emirates, Bahrain and U.S. flying over the Israeli Ministry of Foreign Affairs in Jerusalem.

The Israel-Bahrain agreement states that the two nations “agreed to establish full diplomatic relations, to promote lasting security, to eschew threats and the use of force, as well as advance coexistence and a culture of peace,” in addition to agreeing to seek “agreements in the coming weeks regarding investment, tourism, direct flights, security, telecommunications, technology, energy, healthcare, culture, the environment and other areas of mutual benefit, as well as reaching agreement on the reciprocal opening of embassies.”

The location of where the Bahraini embassy in Israel is unknown, while the Emirati embassy will be in Tel Aviv, where most countries have their embassy except for those belonging to the United States and Guatemala, both of which have been in Jerusalem since May 2018.

The document between the United States, Israel, UAE and Bahrain affirming the Abraham Accords emphasizes “the importance of maintaining and strengthening peace in the Middle East and around the world based on mutual understanding and coexistence, as well as respect for human dignity and freedom, including religious freedom.”

The document also expresses support for “science, art, medicine, and commerce to inspire humankind, maximize human potential and bring nations together,” in addition to calling for an end to “radicalization and conflict to provide all children a better future.”

None of the documents have any enforcement mechanisms.

‘An abundance of faith and political fortitude’

Jewish and pro-Israel organizations applauded both the UAE and Bahrain normalization deals when they were announced.

The Jewish Council of the Emirates (JCE), which represents the United Arab Emirates’ burgeoning Jewish community, hailed today’s signing of the Abraham Accords as a peace agreement that can have a transformative effect for Muslim-Jewish understanding and cooperation across the Middle East.

“This historic deal would not have been possible without an abundance of both faith and political fortitude. We stand in admiration for the leaders of the United States, United Arab Emirates and Israel for brokering this epoch-making event, heralding in a new era of peace,” said JCE president Ross Kriel. “We’ve been praying for this day for years, and today, those prayers have been answered. This moment will forever redefine life in the Middle East.”

He added that “the news that Bahrain followed thereafter gives us even greater hope for the future of a peaceful, welcoming, and inspired Middle East—one in which this type of interfaith harmony is not the exception, but the norm.”

The signing ceremony was attended by dignitaries from the United States, Israel, the UAE and Bahrain, in addition to representatives from Oman and Sudan, both of which do not have formal diplomatic ties with Israel though have been touted as possibly following Abu Dhabi and Manama. Both Republican and Democratic Congress members were there. Former British Prime Minister Tony Blair came to the proceedings as well.

Prior to the ceremony, Trump met with Netanyahu in the Oval Office—after doing so with Zayani and Nahyan—when the president gave the prime minister a golden “key to the White House.” Trump said it’s “a special token of affection” for the Israeli leader, who responded that Trump has “a key to the hearts of the people of Israel.”

As the ceremony took place, rockets were launched from Gaza into southern Israel, causing minor damage and multiple injuries.