The lighting of the fifth candle of the huge Menorah by the EU leader took place on Rond Point Schuman, in front of the Berlaymont, the seat of the European Commission in the EU quarter.

This event is officially included in the cultural agenda of the city of Brussels. The city mayor, Philippe Close, also lit a candle.

President von der Leyen said: ‘’It is wonderful to be present here at an ancient Jewish tradition, celebrating a miracle from over two thousand years ago. But I believe all of us – modern-day Europeans – have something to learn from this Jewish festivity. Chanukkah is a story of resilience and perseverance. It is the story of how the Jewish people rekindled the light inside the Temple, against all odds and in circumstances that seemed desperate. Chanukkah bears a message of hope for all of us in these times of pandemic and recovery.”

She added, ‘’Our European culture would not be as rich as it is without Jewish culture, Jewish values, Jewish art and Jewish cuisine. European Jews have contributed immensely to the making of modern Europe, and to the shaping of our European identity. You have been ‘a light unto the nations’, just like the candles that we are about to light.’’ 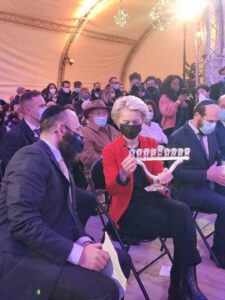 The European Commission President stressed that the history of the Jewish people ‘’is also one of persecution’’, saying that despite the fact that the European Union has been built on the promises to put an end to intolerance and antisemitism, ‘’we see that antisemitism has resurfaced across Europe.’’

‘’Too many Jewish schools and synagogues, today, have to be protected by armed guards. A stunning 70% of European Jews do not feel safe when wearing a kippah, or a Star of David. And throughout the pandemic, Jews have been the target of all sorts of conspiracy theories and hate speech.’’

Von der Leyen recalled the recent presentation by the Europea Commission of its first-ever strategy on combating antisemitism and fostering Jewish life. ‘’It proposes practical measures, from fighting anti-Semitic propaganda online and offline to protecting Jewish communities around Europe. But it is also – and this is very important for me – crucially a strategy on fostering Jewish life in our continent,’’ she said.

She noted that seven in ten Europeans say that they know nothing about Jewish life and Judaism. ‘’This means ignoring an essential part of our European culture. So the strategy puts a premium on teaching Jewish history to our children and on promoting Jewish heritage in our cities. Because Jewish history is our history, Jewish life is our life, Jewish is Europe. So let us foster that and let us celebrate that.’’