Breaking
You are at:Home»Western Europe»”Enough is Enough” to singling out Israel on a permanent basis at UN Human Rights Council

GENEVA—Pro-Israel groups from several European countries rallied Monday outside the building of the United Nations Human Right’s Council in Geneva where hundred s of demonstrators said  ‘’Enough if Enough’’ to singling out Israel on a permanent basis.

The 47-member UNHRC held its  40th session to debate the “item 7”, a fixed agenda item solely dedicated to seven separate reports on alleged Israeli ‘’war crimes and human rights abuses.’’ By comparison, some of the world’s most notorious human rights abusers, including North Korea, Venezuela and Syria, are the subject of just one resolution each.

The ”Rally for Equal Rights” was initiated by UN Watch, a human rights advocacy group.

Among the items debated was the 228-page report by the UN Gaza Commission of Inquiry on the weekly Hamas-led border demonstrations known as the “Great March of Return.” About two hundred Palestinians were killed and hundreds more wounded during the protests from March to December 2018, the subject of the inquiry. The commission’s chairman, Argentine diplomat Santiago Canton, accused the IDF of “application of lethal force [that]was in the majority of cases authorized unlawfully.”

Canton charged Israel with engaging in the “arbitrary deprivation of life.”

The new Gaza inquiry’s report calls on countries around the world to “arrest persons alleged to have committed the international crimes” — IDF personnel of all ranks — and to subject them to “individual sanctions,” including “a travel ban or an assets freeze.”

The report further calls for the UN Human Rights Council to “manage the dossiers on the alleged [Israeli] perpetrators,” to be provided to national and international tribunals, “including the International Criminal Court.”

Israeli analysts were sharply critical of the Gaza report, pointing out that the commission had flatly ignored statements by Hamas’ own leaders that depicted the clashes on the border as a war on Israel, rather than a civilian protest.

Speaking before diplomats and activists attending a side event in the UNHRC, lieutenant Colonel Geoffrey S. Corn (ret.), a law professor who formerly advised the U.S. Army on the laws of war, and Col. Richard Kemp, the former commander of British forces in Afghanistan, cited structural, legal and operational defects with the UN’s inquiry, and said the report promoted ‘’false claims.’’ 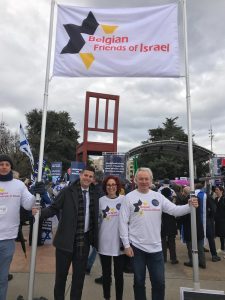 Pro-Israel groups rallied Monday outside the building of the United Nations Human Right’s Council in Geneva where hundred s of demonstrators said ‘’Enough if Enough’’ to singling out Israel on a permanent basis.

By wrongly framing the Gaza border violence as “predominantly civilian protests,” said Corn, “the Commission of Inquiry distorts the reality of what it confronted.”

“By omitting from the UNHRC inquiry reports of the use of human shields by Hamas, the report incentivizes these terror tactics in the future, and the risk posed to the civilian population of Gaza is exacerbated. If we are really concerned about mitigating harm done to civilians, we should be condemning Hamas’ actions and this report,” he said.

In the UNHRC plenary on Monday, UNHRC members Pakistan, Cuba, Iraq, Qatar, Saudi Arabia and others welcomed the report, as did observer states such as Syria, Venezuela and Russia.

Kemp, an expert on national security and counter-terrorism, had testified before the UN inquiry, and was present at the Gaza border himself.

“The United Nations has played directly into Hamas’ hand and the UNHRC is but an instrument of Hamas terrorism. This report, as well as countries that vote for it, encourage Hamas towards further terrorism in the future,” he said, adding that his personal testimony to the inquiry was completely ignored in the report.

Joe Truzman, an expert on Palestinian militant groups active on the Gaza border with Israel, presented evidence revealing false accusations and omissions of key facts in the UN report, including that five “victims of IDF gunfire” named in the report were actually members of militant groups including Hamas.

Following are militants who Truzman showed were falsely characterized in the reports:

• Mahmoud Abu Taima: The UN report claims that Taima was killed approximately 150 meters from the fence, but the report failed to mention he was a fighter of Hamas’ military wing, al-Qassam Brigades, as listed on one of their website

After presenting his evidence, Truzman concluded that the inquiry’s misleading identification of militants as ‘’civilian victims’’ leads to a skewed perception of the Israeli response.

“Contrary to the commission’s report, Palestinians present during March of Return demonstrations and riots were armed. Such militant activity is still present within Palestinian border units,” said Truzman.

Addressing the rally protest in Geneva, U.S. Ambassador to Germany Richard Grenell described the UNHRC as ‘’antisemitic.’’ “To pass resolution after resolution against Israel while ignoring China, Russia or Cuba is a horrendous hypocrisy,” he said.

U.S. Ambassador to Germany Richard Grenell said at a protest outside the UNHRC.

The US ambassador bewailed the fact that among those deciding whether Israel is violating human rights “are representatives from absolute monarchies, one-party states and military dictatorships.”

He denounced the UNHRC for making a debate on human rights in Israel a permanent feature at every council session.