Breaking
You are at:Home»Israel»New EU-Israel diplomatic spat, EU ambassador summoned for a reprimand for ‘’interfering into Israeli legislation’’

JERUSALEM—‘’It is not enough that the EU finances NGOs that strive to undermine the State of Israel and finance illegal construction.it is now interfering with Israeli legislation. Apparently they do not understand that Israel is a sovereign state.’’

This was the wording of a press statement issued late Thursday by  the Israeli Prime Minister Media Advisor informing that he has insructed the Foreign Minuistry Director General to summon the EU Ambassador to Israel, Emanuele Giaufret, for a second reprimand and that ‘’he also intends to take additional steps.’’

The diplomatic reprimand follows a  report that the ambassador had lobbied members of the Knesset, Israel’s parliament, to vote against a bill being advanced by the Likud-led coalition government to enshrine Israel’s status as the nation-state of the Jewish people.

The European Union is pressuring Israel not to pass the law, claiming one of the clauses is ‘’racist,’’ and if passed would harm Israel’s international standing. 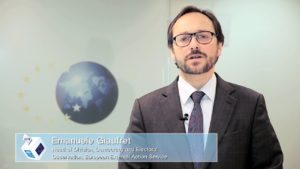 The diplomatic reprimand follows a report that EU ambassador Emanuele Giaufret (picture) had lobbied members of the Knesset, Israel’s parliament, to vote against a bill being advanced by the Likud-led coalition government to enshrine Israel’s status as the nation-state of the Jewish people.

The current draft also includes a controversial section, Clause 7, which would permit the establishment of town councils to maintain the character of a particular community, and bar would-be residents from other sectors of the population.

“The law stinks of racism, and it discriminates against various groups – particularly Arabs – and weakens the values Israel tries to uphold,”Ambassador Giaufret reportedly said.

Netanyahu has defended the bill by saying most Israelis want to preserve the Jewish identity of the country, and that “the majority rules.”

“In the Israeli democracy, we will continue to protect the rights of both the individual and the group — this is guaranteed. But the majority have rights too, and the majority rules,” he said.

“The vast majority of people want to preserve the Jewish character of our country for generations to come,” he said. “This combination of individual rights and group rights are the definition of a Jewish and democratic state.”