BRUSSELS — ‘’It is very worrying and depressing to see such vile antisemitic expressions made at the European Parliament by a member of TheProgressives,’’ tweeted Katharina von Schnurbein, ,the EU’s Coordinator on Combating anti-Semitism, after Portuguese MEP Ana Gomes called Jewish organizations ‘’a very perverse lob that and uses intimidation tactics.”

‘’Such expressions are not illegal, but they are antisemitic, and we will speak up against any form of  anti-Semitism for the sake of an open society,’’ von Schnurbein added.

Gomes, who is a member of the Group of the Progressive Alliance of Socialists and Democrats (S&D) made the incendiary comments on 28 February as she hosted in the European Parliament in Brussels a conference with as speaker Omar Barghouti, co-founder of BDS (Boycott, Disinvestment, Sanctions) movement which calls for a total economic, academic and cultural boycott of the state of Israel. During her introductory statement, the MEP falsely accused the Jewish organizations, which had protested and opposed the invitation of Barghouti in the parliament, of telling ‘’a lot of lies’’.

When Gomes was asked during the Q&A session if she had perhaps misspoken, she categorically refused to retract her offensive remarks. 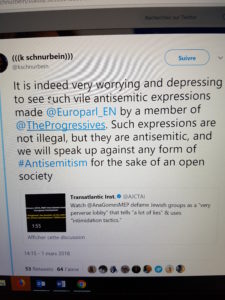 ‘’Such expressions are not illegal, but they are antisemitic, and we will speak up against any form of anti-Semitism for the sake of an open society,’’ von Schnurbein tweeted.

“Who would have thought that 70 years after the Holocaust, a center-left lawmaker in the European Parliament would take a page straight out of “The Protocols of the Elder of Zion,” spinning a tale of an allegedly sinister and ‘perverse’ Jewish lobby,” said Daniel Schwammenthal, Director of the American Jewish Committee (AJC)  Transatlantic Institute, in a statement.

“The IHRA (International Holocaust Remembrance Alliance) working definition of anti-Semitism, which the European Parliament itself adopted less than a year ago, considers as anti-Semitic ‘’making mendacious, dehumanizing, demonizing, or stereotypical allegations about Jews as such or the power of Jews as a collective.’’

Schwammenthal said Gomes’s statement ‘’is a textbook example of a classic anti-Semitic trope.

“It is shocking enough that Mrs. Gomes would promote extremist groups like the BDS movement, which ultimately seek the end of Israel as a homeland for the Jewish people, and would even go as far as demonizing Jewish civil society organizations. But if Parliament remains silent in the face of her vitriolic attacks on European Jews, it risks damaging the reputation of the entire institution,” he added.

The S&D group has distanced itself from Gome’s event hosting Barghouti and asked her to remove the group’s banner from the conference room.