You are at:Home»Western Europe»Dutch Social Democrat Frans Timmermans to become President of the European Commission on Tuesday ?

BRUSSELS—EU leaders failed Monday to choose the new EU institutions leaders – European Commission President, European Parliament President, High Representative of the EU for foreign and security policy and President of the European Central Bank, despite  all-night and morning meetings. They will meet again Tuesday, on the same day the new 751-member of the European Parliament will sit for its first plenary session in Strasbourg.

According to news reports, some leaders who are members of the Conservative European People’s Party (EPP), the largest group in the European Parliament opposed a plan proposed by German Chancellor and other EU leaders to install  58-year-old Frans Timmermans, a Social Democrat, former Dutch Foreign Minister and outgoing European Commission Vice-President at the head of the European Commission, the EU’s executive branch. Under the plan, German Conservative Manfred Weber -initially Merkel’s candidate for the top post would become President of the European Parliament. 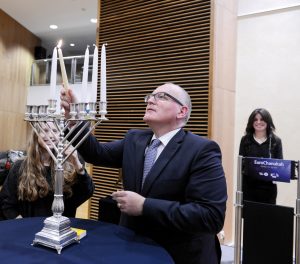 The leaders of Poland and Hungary in particular reportedly opposed the choice of Timmermans.

Also, members of the EPP were unhappy with the idea of holding onto just one of the three EU presidencies they currently hold (European Commission, European Parliament and European Council) and rejected the proposal as unacceptable.

Reports suggested that under a new deal, the EPP would retain the European Council presidency (currently held by Polish Donald Tusk), perhaps in the hands of Kristalina Georgieva, a former Commission Vice President from Bulgaria now working as chief executive of the World Bank. The deal would also called for Belgian Prime Minister Charles Michel, a liberal, to become High representative for foreign affairs (replacing Italian Federica Mogherini), and the liberals’ nominee for the European Commission top post, Danish  Margarethe Vestager, to become first Vice President of that institution. 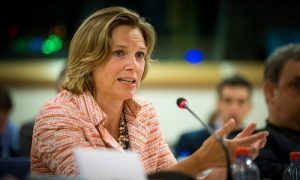 In a message in 2018 on the occasion of Rosh HaShanah, the Jewish New Year, amid a rise of anti-Semitism in Europe, Timmermans declared : ‘’Jews should never have to wonder whether it is safe to display their identity in their own neighbourhood, city or country.Europe must remain a place where Jewish life can flourish and Jews can freely practice their faith without fear or restrictions. It doesn’t matter where the hatred comes from, whether it is right-wing, left-wing, Islamist extremists or whether it comes masked as anti-Zionism, we all have the obligation to stand up and speak out.’’

He added : ‘’I make the pledge to you that I will continue to work on concrete proposals because for me Europe is unimaginable without the Jewish community feeling at ease, happy and safe in our society.’’

Manfred Weber, the German MEP who is likely to become the new President of the European Parliament, was also firm in its commitment to fight antisemitism. He told the European Jewish Press : ‘’It is our common responsibility and duty to make sure Jewish communities feel safe in Europe.” 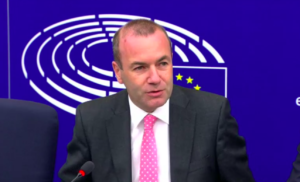 He stressed that the rise of anti-Semitism ”should be an alarm for all political leaders,’’ adding that ”we will do whatever is needed to push back these extremely worrying developments.‘’

Once the new European Commission is appointed in September, it will be up to it to reconstitute the office of the Coordinator on Combating Anti-Semitism. ” Se far, we are encouraged by both Mr Weber’s and Mr Timmermans’ commitment to fighting anti-Semitism,” says the European Jewish Congress in an analysis on the results of the  European elections which took place last May in the 28 EU countries.

The elections resulted in losses for the biggest political groups and gains for populist parties and the Greens.

”Although we can expect a more fractured and polarised European Parliament in the next five years, we are cautiously optimistic about the resilience of the political centre in the face of extremist challenges,” notes the European Jewish Congress.

Timmermans is a member of the centre-left Progressive Alliance of Socialist and Democrats for Europe (S&D), the second largest political group in the European Parliament with 153 seats. The EPP has 185 seats and the third largest is the new Renew Europe group which is composed of the Liberals who were joined by French President Emmanuel Macron’s party elected.

The EPP group is generally considered as more pro-Israel than the S&D.

The new elected European Parliament is meeting for the first time on Tuesday in Strasbourg.